Those Peaky Blinders blokes are back on Netflix, gov’, and bloody ‘ell are they as compellingly brooding and menacing and gangster-family-oriented as ever. For the uninitiated, Peaky Blinders tells the story of the Shelby crime syndicate, led by the always morose Tommy Shelby (Cillian Murphy). Set in the gloomiest, foggiest part of post-WWI England, the series is relentlessly fatalistic, and hits all of the familiar beats you’d expect from a mob saga, but it is nonetheless entertaining. The period it’s set in helps it stand apart from other, similar stories you’ve likely seen before, with Tommy and his brothers carrying the traumatic shadows of The Great War with them throughout the series, and with Tommy’s Aunt Polly (Helen McCrory) being a mighty matriarch who held the family business together while all the boys were off fighting the war.

Peaky Blinders season 3, which has already started airing across the pond on the BBC, will come to Netflix for us Yanks on May, 31st. While we wait, let us once more enjoy one of the most appropriately appropriated theme songs in television history. 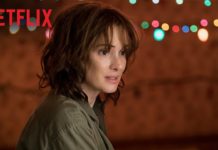 Batman Beyond Poster by Kilian Eng on Sale Today